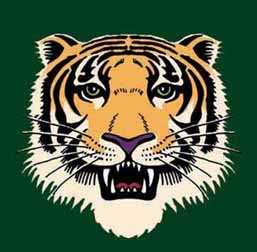 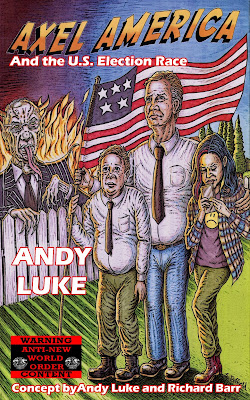 I enjoyed this book a great deal. I'd describe it as a Gonzo surrealist satirical journey through American political skullduggery, conspiracy theories, corrupt media and crazy ideas made flesh. Along for the ride are Axel America, his family, and his conspiracy theorist allies. They're up against ambitious, arrogant billionaire and presidential candidate Morgan Rump, the Faux News media tycoon Oliver Macgregor, anchorwoman O.K. Burly, shady government agents, an ex-nazi scientist (Hermann Martian) and even at one point, the satanic minions of hell!
Axel is a loud, anger-fuelled, paranoid shock-jock (with his own video podcast, 'truth live'), who I would say was based more than a little on a real-life conspiracy-theorist, down to their mutual love of using 'the bullhorn' as a means of communication. Anyone who is familiar with him (and the other character parodies mentioned above), will immediately get the humour and real-world parallels in this book.

Axel is a man too busy being angry, and ramming 'the truth' (as he sees it) down everyones throats, to check his 'facts' and sources. He is enjoyable and palatable as a character however, because although he's a severely flawed, overbearing, raging, confused, self-unaware and delusional fool, he's also at times completely sincere, vulnerable, likeable and has a certain amount of integrity.
He's someone who really loves his family, and will go all out to protect them, even if a lot of the perceived threats are imagined. Sometimes he hits the nail on the head though, and things that others laugh-off prove to be right. He also comes out with some hilarious phrases, mannerisms and ideas of the laugh-out-loud variety.

Another parody of a real-life British conspiracy theorist in this book is the more new-age orientated, alien-obsessed character and friend of Axel named 'Milk Falk'. There's one chapter in the book, where Falk thinks that the best way to infiltrate a dinner party for the power-base of the elite is by attaching a fake lizard tail. I'll let you see whether or not he pulls it off.

At the heart of the story is the all American family unit; which takes the age-old American sit-com idea and subverts it. There's Axel, his long suffering, upstanding wife Liberty, the good natured, sensitive and eager-to-please son Constitution, and the rebellious, tempestuous teenage daughter, Martha.

There's room for little episodic chapters, lots of action and comedic skits, even some slapstick within the longer story arc of the clandestine power-mongers trying to rig the election, and them using Axel and a member of his family to do so.

The book is often chuckle inducing and also a cathartic read, finding absurd humour in even the blackest veins of the Corporate American rabbit hole, or when lampooning the unscrupulous behaviour of the deluded, and the devisive. Andy Luke also has fun with his characters, fleshing them out and having them interact in amusing and interesting ways, and isn't afraid to poke some fun at all sides of the equation, with interesting and original ideas.
Stand out episodic moments for me included where Axel is forced to attend an anger-management group, and ends up causing mayhem but also a kind of anarchic bonding session, a chapter where Axel & his son are out hunting, and stumble across a bunch of  animal rights activists (the banner slogans were priceless), the devasating effects of Axel's super-powered bullhorn turned up to full, and where his weaponised home-security system 'Axel-bot' is accidently triggered while Axel is away, and locks down the house, targetting his family and friends, and carries out it's programming to eradicate the threat.

Maybe it's just me, but I felt like there was a touch of the old Spike Milligan  or Douglas Adams in this book, ie; the mischievous relish in finding the ridiculous and worrying in real-life and sending it up in a very funny and surreal manner. The book looks also at the hyperreality and hyperbole that exists in “The Greatest Nation On God's Green Earth” and much of the world today, where many people now believe whatever they want (or what they are told from manipulative sources). 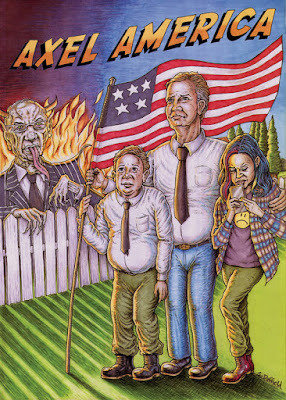 The author comments on all this in numerous ways, never becoming preachy, and adding comic book-esque and pop-culture touches which are welcome and recognisable and part of his sense of humour.
What I liked most about this book is the humour and imagination. It takes lots of ideas and has fun with them in often original and off-kilter ways. I enjoyed the ending a lot too, which I won't spoil. All that I'll say is that there's a good Axel moment where he addresses the public with one of his rants, and makes some pretty good (and funny) points. What happens during and immediately afterwards also made me think a little about the hypocrisy about those who just talk the talk and those citizens and activists who actually take on responsibilities and the thankless task of trying to create real change in a corrupt world. But I also think it was mainly about the character figuring out, in his comical way,  in the moment, what he really wanted to do, and what was important to him.

The only criticism I have is a minor one, and that is the choice of title. “The Election Race” part of it. I think they shot themselves in the foot a bit there. Although topical, the election has been and gone, and the book is about far more than that event, and was written with not just the two candidates in mind (In fact one of the candidates only gets mentioned once or twice). The story and satire is of a much more broad, surreal, richer and ambitious scope, and I feel the title sells it short a little. So it's possibly misleading to anyone who just sees the title, who may think it's no-longer relevant, when in fact it's very much so.

Story-wise however, I have no qualms, it's a really enjoyable romp which I've recommended to my friends.  I'd love to read a sequel one day. Oh, and did I mention I did the artwork for the cover?